I left Canterbury Christ Church University with a thorough understanding of how to approach and question creative briefs as well as a presentable portfolio, which ultimately landed me my first job.

I left Canterbury Christ Church University with a thorough understanding of how to approach and question creative briefs as well as a presentable portfolio, which ultimately landed me my first job.

This course is also available with a Foundation Year.

Graphic Design involves developing your individual skills as a professional designer from the moment you arrive at our purpose-built studios.

You’ll leave with a professional portfolio based on your own interests, an in-depth knowledge of graphic design software (Adobe Creative Cloud), tools (risograph printing, laser cutting and etching, screen printing) and interpersonal skills equipping you to succeed in a competitive industry.

Throughout the course you’ll put your skills to use working with practising designers completing live briefs and entering national competitions. To capitalise on your design work, you’ll learn business and entrepreneurial aspects of the industry through working with a professional design agency.

The course is taught in specialist graphic design studio spaces in the new Daphne Oram building where you will have access to industry-standard software and a range of art and design technologies. We encourage, and support you, to take on freelance commissions throughout the course.

Dr Kate McLean, an internationally renowned creative smellmap designer, leads a team of graphic design industry specialists who care about your passions, your interests and your work.

Good designers are always in demand and having the knowledge, creativity and determination will help you find the right job, take on freelance work and even give you the confidence to set up your own business.

From day one, we'll consider you as designer with thoughts and opinions that can lead to great ideas and impactful work.

What does a Graphic Designer do anyway?

Look around our creative arts building

A typical offer would be 88-112 UCAS Tariff points

Applicants have the opportunity to demonstrate their suitability for the chosen programme through the presentation of a portfolio of relevant practical work.

During Year 1, you'll develop the skills essential to graphic design, including a rapid introduction to coding and scripting, and games design software.

The academic year is split into two semesters. Semester 1 focuses on introducing the design process and a range of software and practical skills. In this first semester you'll be introduced to practical design skills required for print and for web design, learn the fundamentals of meaningful research, how to critique and the basics of coding.

Semester 2 focuses on broadening your experience into the printmaking studio through screen printing and other physical techniques to produce your designs for awareness-raising T-shirt designs. You'll also discover how animation works in both 3D and 2D, modelling your ideas and making design come to life. In this semester you also look at the History of Design and understand the context in which designs have been produced across cultures and ages.

Your tutors will encourage you to consider other designers, great designs and the wider world around you as you work.

You'll be taught through a combination of practical workshops, lectures, tutorials and critique sessions.

Each module will require you to respond to at least one 'brief' (as in industry). The brief will specify your deign challenge, itemise resources and assets, note any constraints and advise a schedule of activities.

During practical workshops you'll gain the skills and technical knowledge needed to respond to the briefs. Lectures will give you a firm grounding in the theoretical aspects of graphic design and will help you to develop your critical understanding of your own practice. Tutorials enable you to discuss your individual design work with your tutors and the critique sessions are to help you show and explain your working processes and to deliver and receive feedback with your peers and tutors. This combined approach encourages expression of your ideas, observations and experiences within a supportive academic environment.

You'll also meet with your academic personal tutor to get personal support throughout the course.

When not attending lectures, critiques, workshops or other timetabled sessions, you'll continue learning through self-study. Typically, this involves working on practical briefs and preparing for coursework assignments, workshops and tutorials, reading journal articles and books and undertaking research in the library, and making use of the print making studio facilities. Independent learning will take up to 24 hours per week.

Your module tutor will direct you towards specific readings and/or activities to complete before class.

In some of your modules in Year 2 and Year 3, you'll undertake independent research working under the supervision of a member of the course team. You will meet with your supervisor regularly and they will support you to ensure you carry out your research effectively and reach your full potential.

While your workload will change in response to deadlines, you should see your studies as a full-time job of at least 36 hours per week.

The team consists of highly qualified academics, who have interests and experience in diverse areas of graphic design. All of the teaching team hold teaching qualifications and are research-active, sharing a range of expertise and experience. They all have experience in delivering research-informed teaching. For more information see individual staff profiles and our professional practice web sites:

The programme is led by Dr Kate McLean, an internationally renowned sensory designer and creator of smellmaps. Kate holds an MFA in Graphic Design and a PhD in Communication Design from the Royal College of Art. She co-edited a book, "Designing with Smell: Practices, techniques and Challenges" published in 2018. Kate is currently working on smell-based research projects with communities and hospitals.

As intelligent, talented young designers you will learn skills of graphic design through an understanding that we all need to be ethical and sustainable, using Graphic Design for Good.

of our Graphic Design students were satisfied with the quality of teaching on their course.

Graphic Design is assessed through the submission of practical assignments normally consisting of a practical response to a brief (such as a game), and a supporting set of materials (such as a PDF collection of sketches and planning, and/or a written or video-based evaluation). The requirements of each module will be made clear in their handbooks / briefs. There is one module per year that is assessed using essays, but this is primarily a practical degree programme. There are no formal exams. Each module contains several opportunities for 'formative' assessment also known as a “crit”/"critique" for which you give and receive feedback from your tutor and peers.

Percentage of the course assessed by coursework

Graphic Design is assessed 100% through coursework. Each practical module (5 per year in Years 1 and 2) will contain 2 briefs requiring responses from you. In the case of group work your individual contribution is what is assessed. While this is primarily a practical degree every year you have one theory-based module requiring an essay as your coursework submission. You are assessed against module-specific Learning Outcomes and School-level marking criteria which are made available to students during their studies.

of our Graphic Design students were satisfied with the learning opportunities on their course.

Graphic design is a creative professional discipline that remains in strong demand, due to the ways that its underpinning principles inform almost all visual communication. Graduates from the course have moved into a range of creative careers, including working as graphic designers either salaried within design agencies or on a freelance basis.

Our interdisciplinary ethos and approach assists graduates in working not only in prescribed work roles such as graphic designers, graphic artists and artworkers, but in working across the range of creative industries including graphic design, influencing, marketing, social media, web design and beyond.

Many students also continue on to further study, such as postgraduate courses in graphic design or related creative disciplines both at Canterbury Christ Church University and at other institutions.

I left CCCU with a thorough understanding of how to approach and question creative briefs as well as a presentable portfolio which ultimately landed me my first job. You don’t really realise how many skills you are absorbing in a relatively short space of time. The academic staff did a great job at encouraging curiosity that has become second nature for me in the real world." 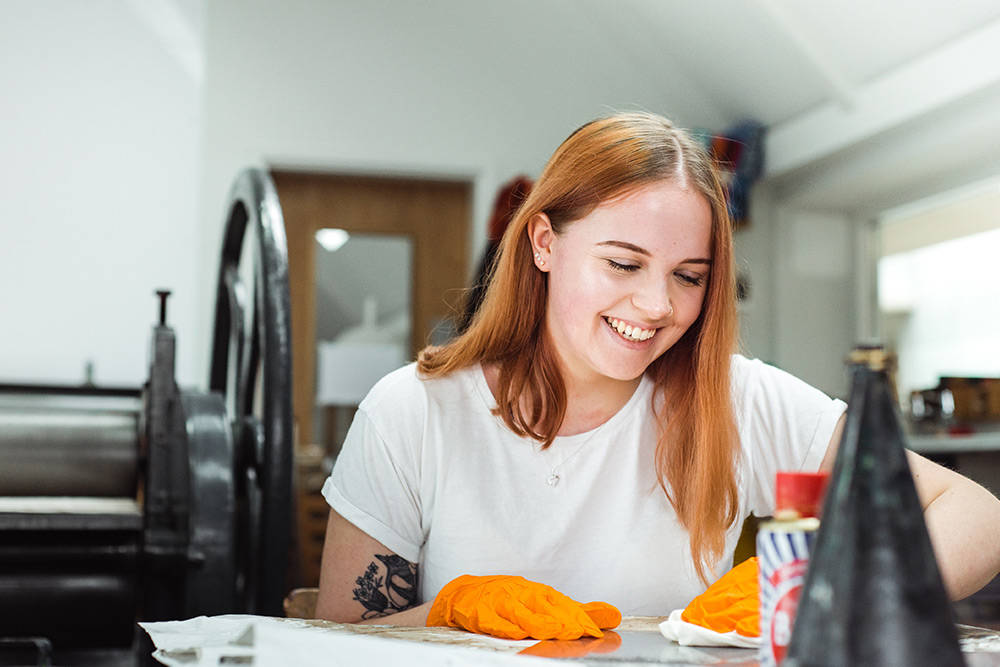 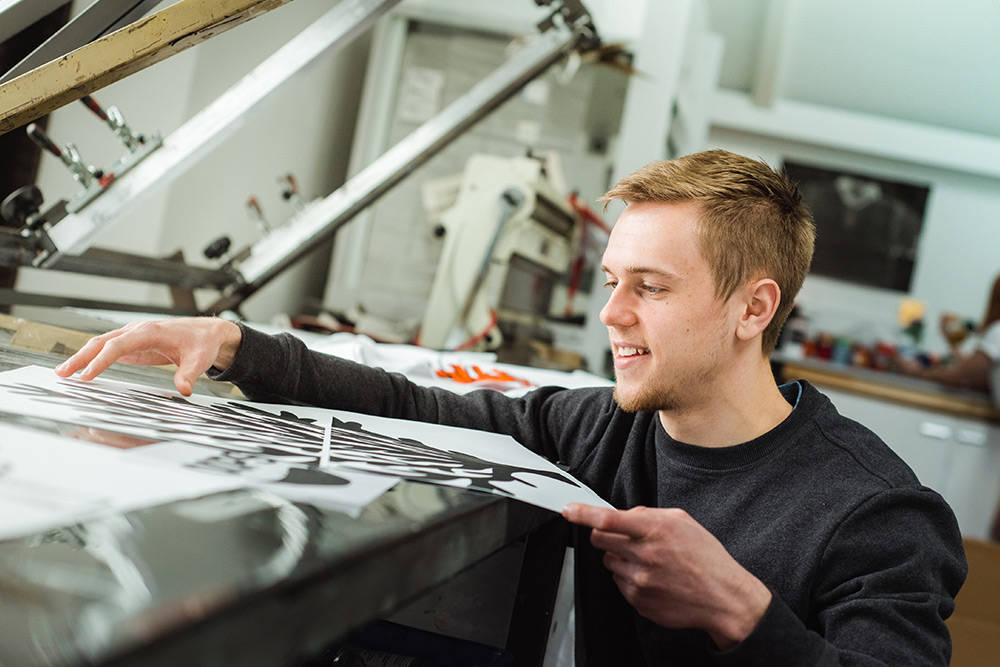 Printing a design on a t-shirt

Printing a design on a t-shirt

A Graphic Design student printing a design on a t-shirt. 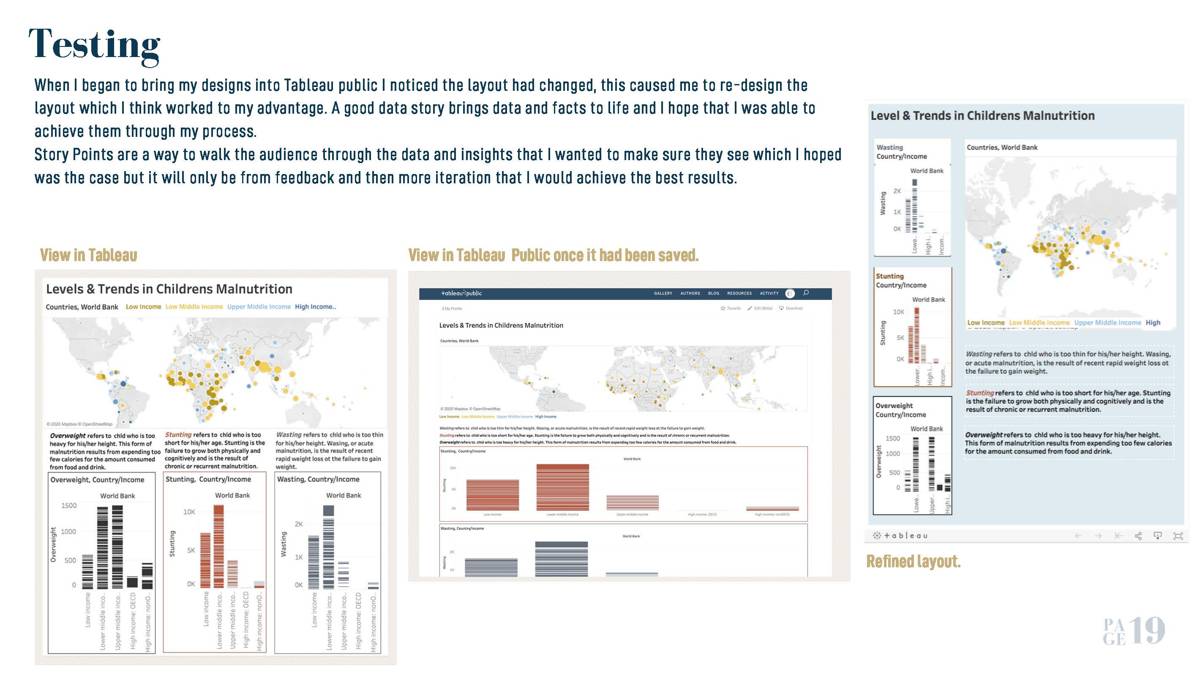 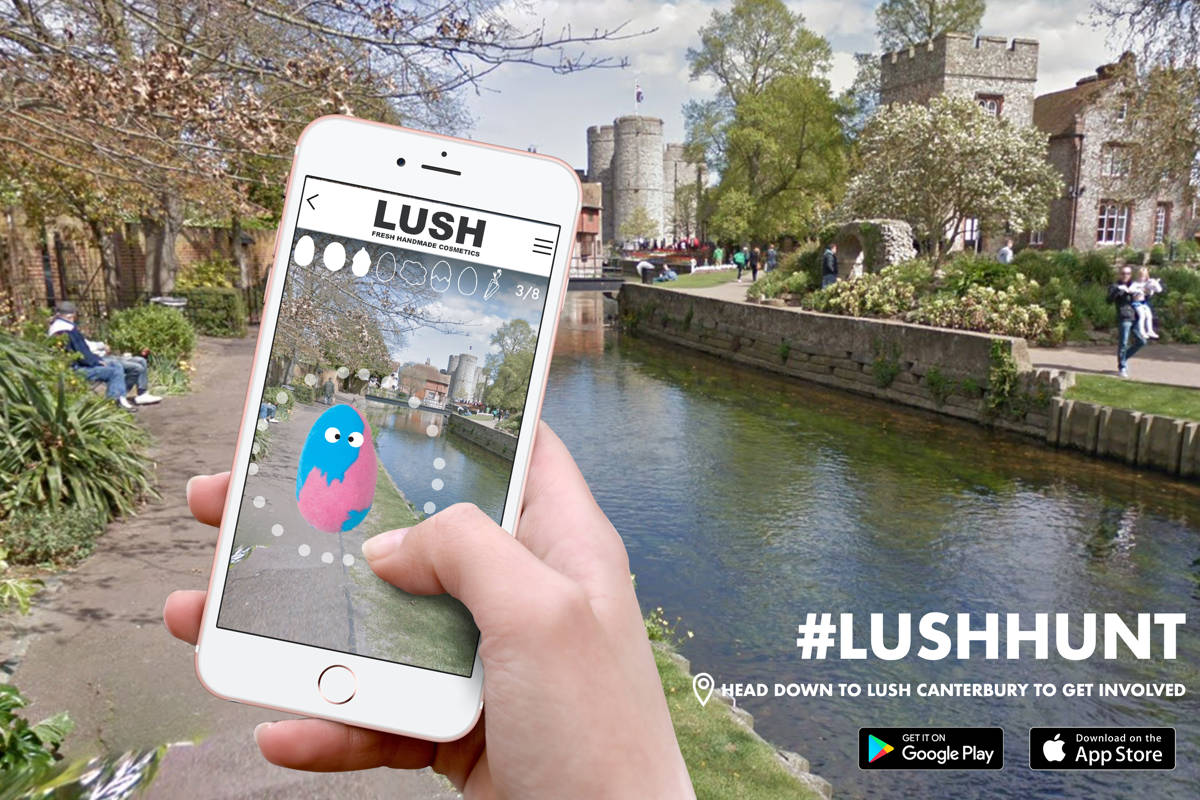 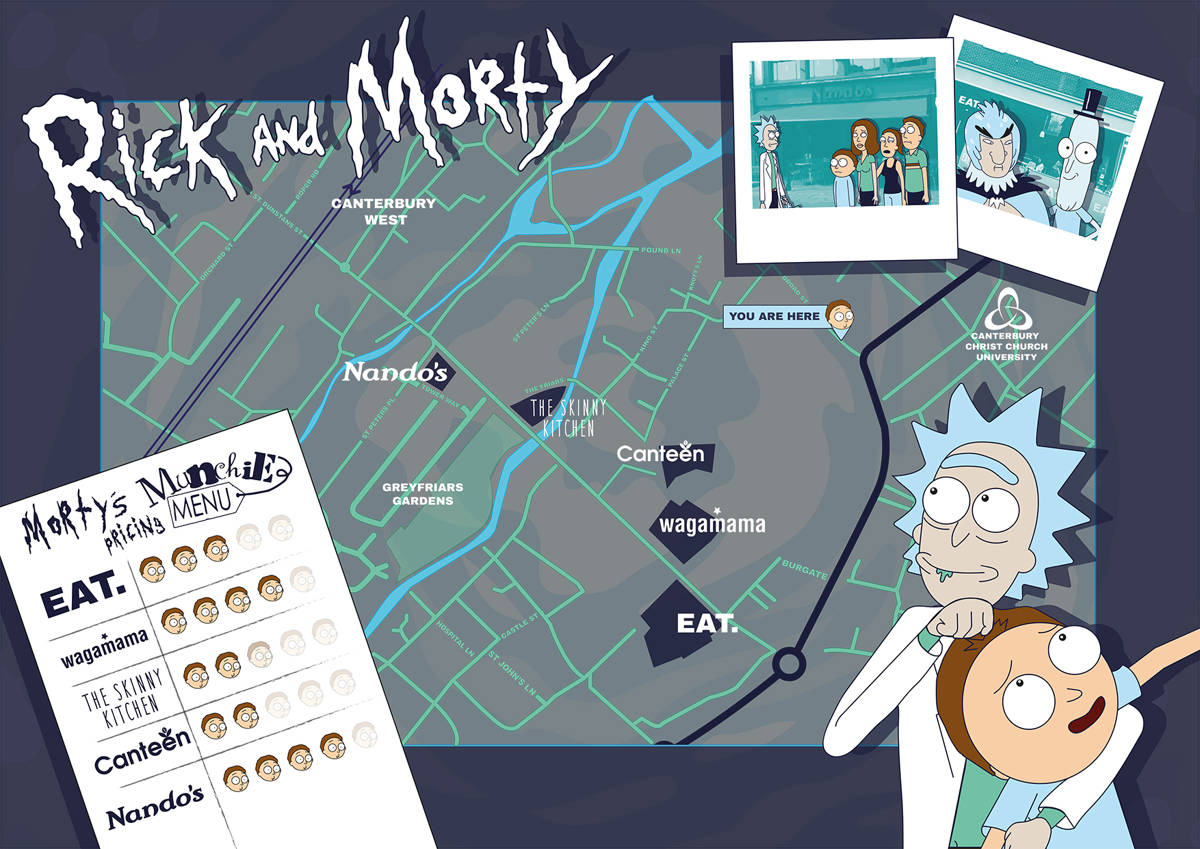 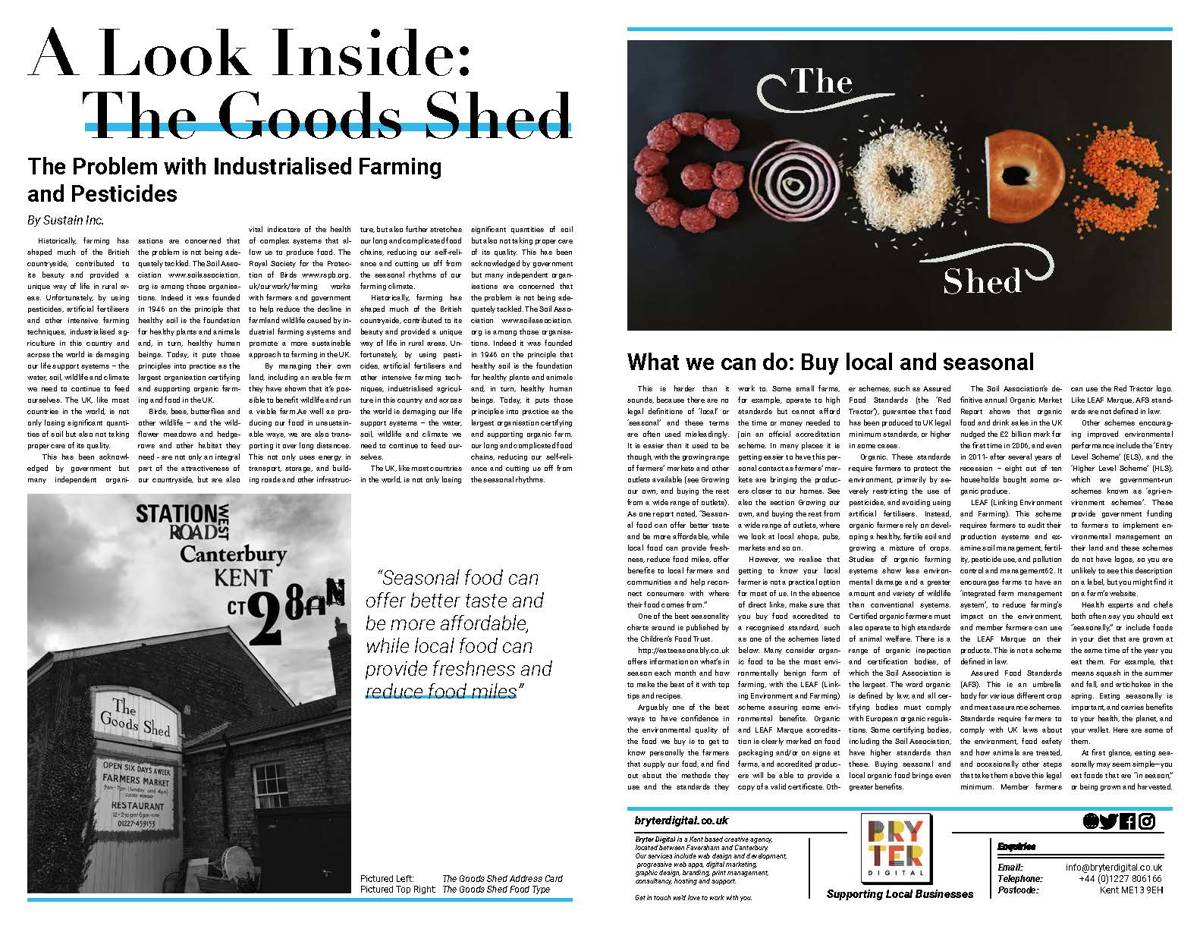 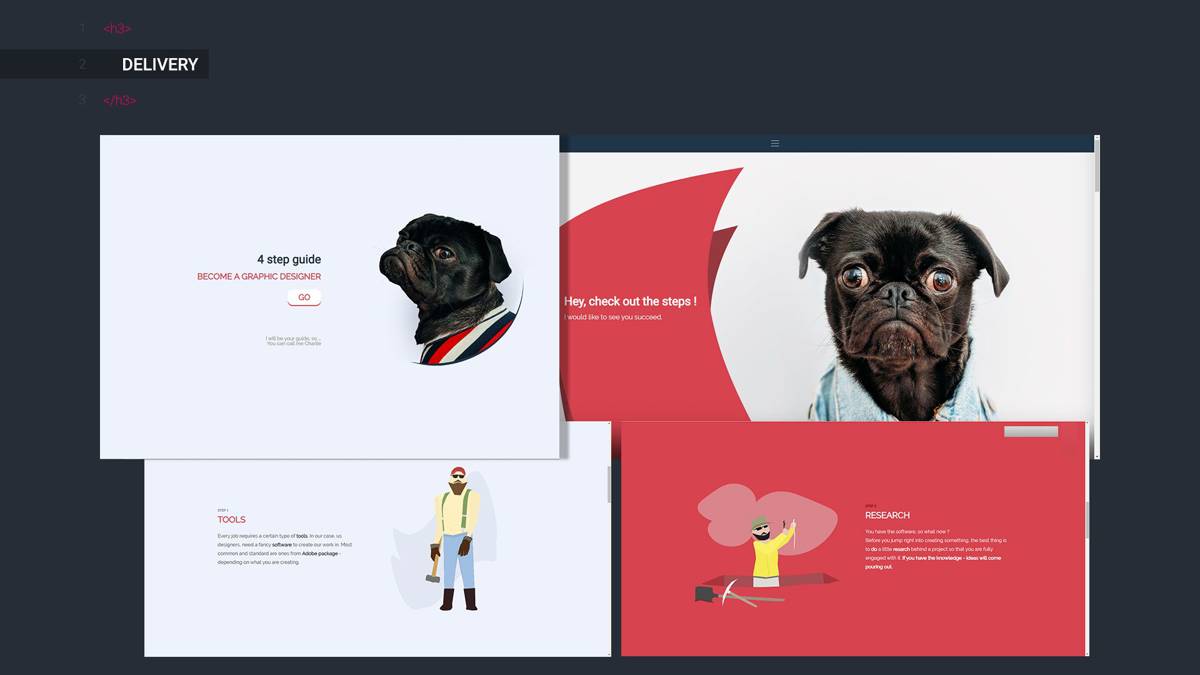 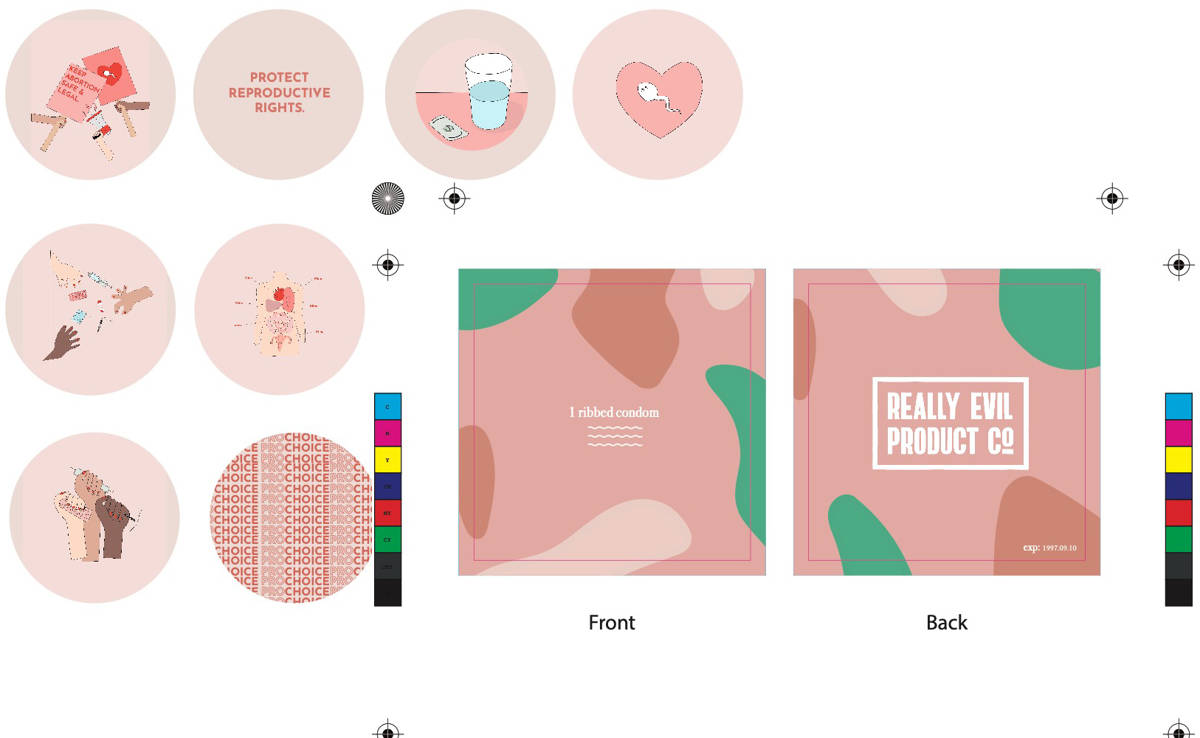 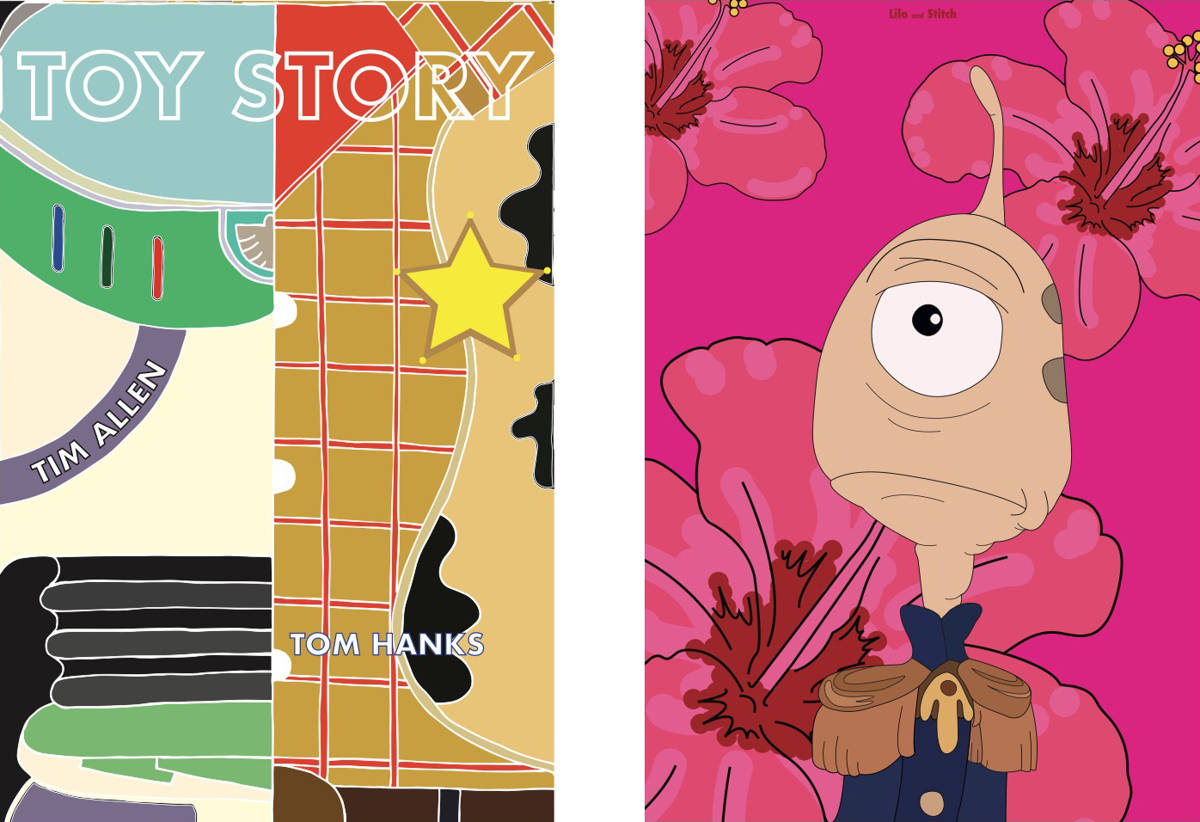 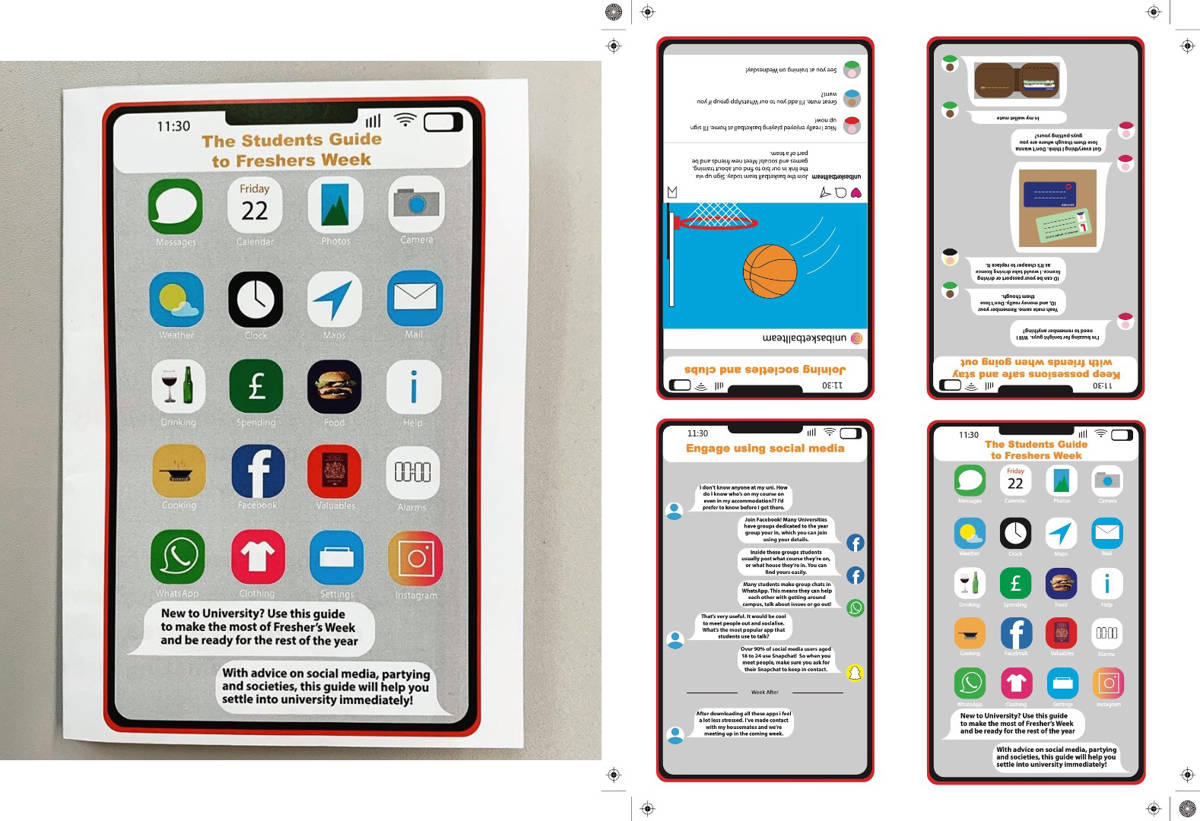 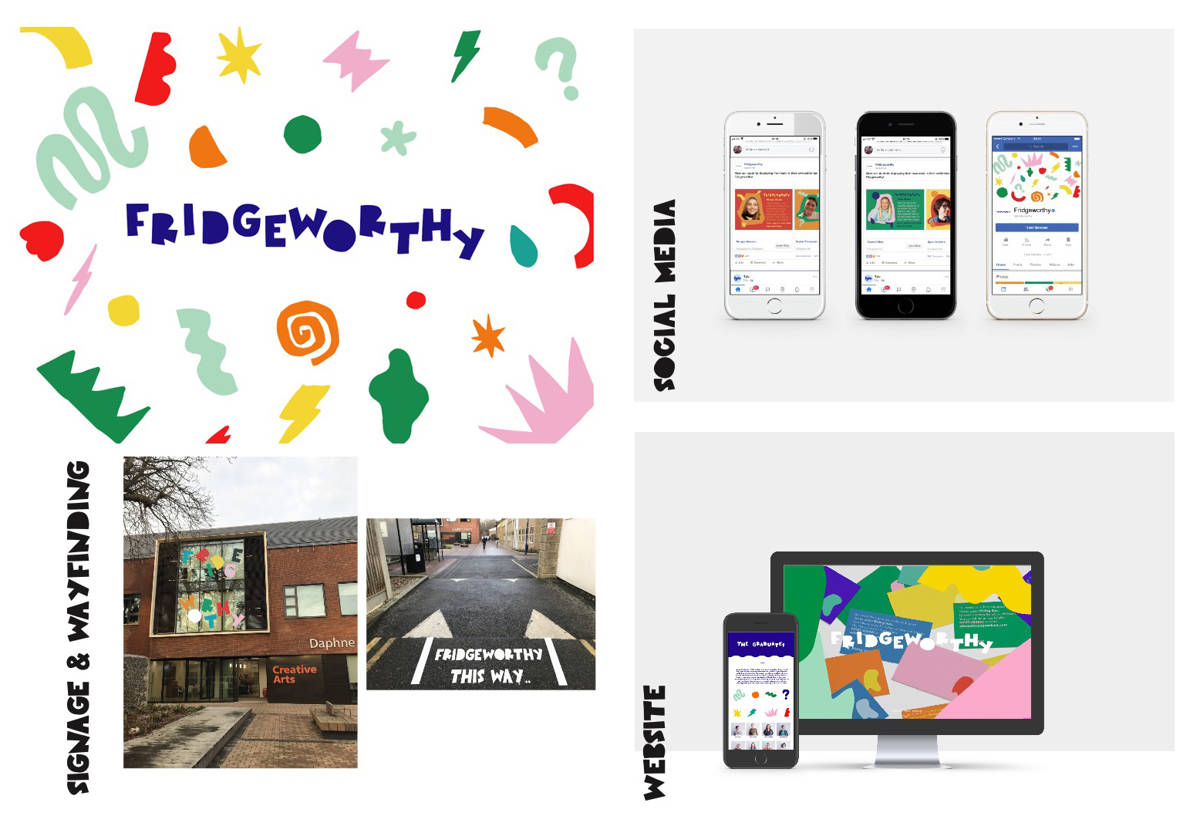 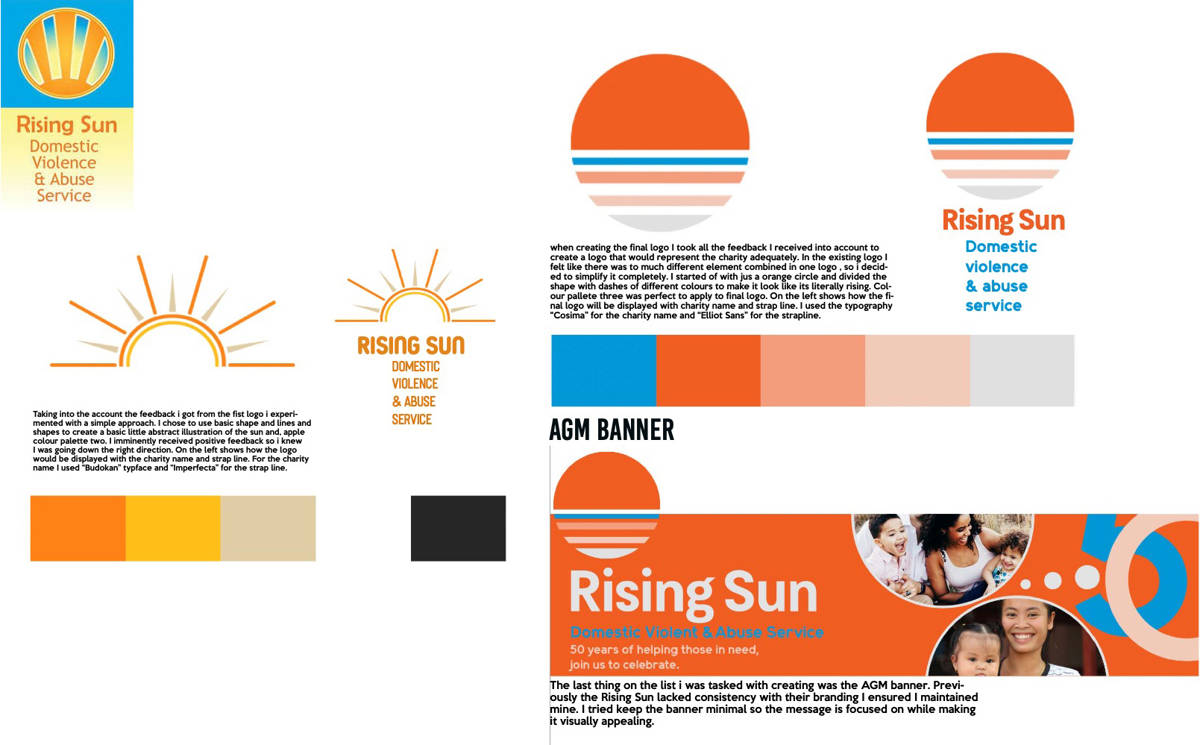 Students with an Overseas fee status will be eligible for an International student Scholarship fee discount of £1,500, which will be applied to all Full-time Undergraduate courses with a tuition fee of £14,500.

Students with an EU fee status will be eligible for the EEA Transition Scholarship. Further details can be found here: https://www.canterbury.ac.uk/study-here/fees-and-funding/international-student-fees-and-funding